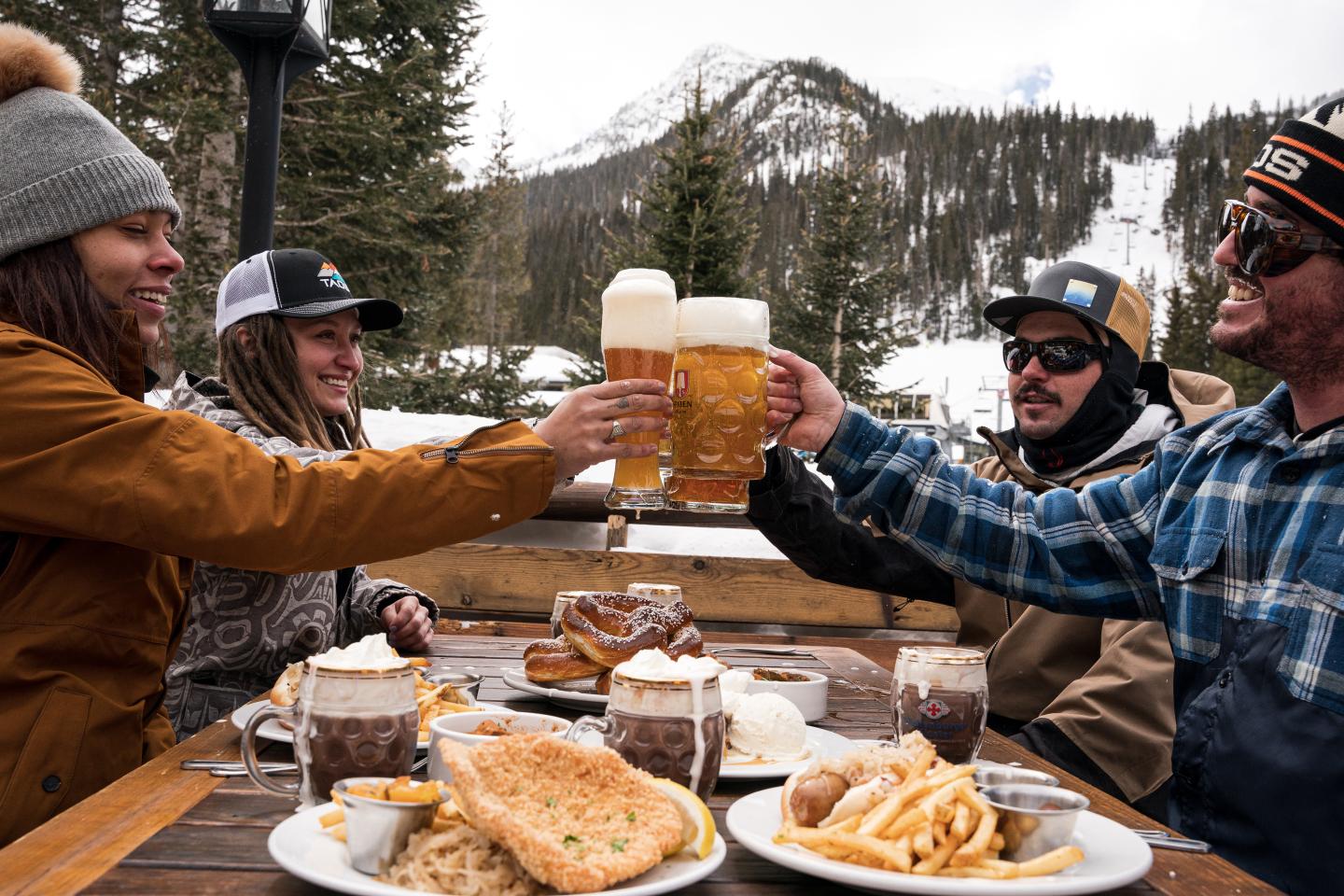 Did you know New Mexico ranks 12th in the nation for small breweries per capita? We take our brewing pretty seriously here. Throughout the whole state there are 88 small breweries, let’s take a beer tour in The Land of Enchantment!

Where to Find Local Beer in Taos Ski Valley

At Taos Ski Valley, we offer a variety of local brews on the hill and at our local eateries including 192 at the Blake, The Bavarian, and Rhoda's. In addition to these sit-downs, CID’s Mountain Market offers a nice selection of local canned beers you can grab and take with you back to your suite at The Blake.

Beers You Can Find on The Mountain

We have a wide variety of local beers on tap on the mountain including Ex Novo’s Mass Ascension IPA, named after a Balloon Fiesta reference when hundreds of balloons fill the cool New Mexican fall skies, the Second Street Kolsch from our friends in Santa Fe at Second Street Brewery, and  Tractor Brewing and Black Mesa ciders for our cider lovers.

Taos is well known for keeping its historic roots alive, but that does not mean we are stuck in the past. We have hopped onto the microbrewery train and it is thriving here in our charming, small town.

Taos Mesa Brewing’s taproom can be found in the heart of downtown. The taproom features fresh, craft brews and artisan woodfired pizzas, sandwiches, and salads. This brewhouse offers more than a dozen craft beers including stouts, IPAs, a few German-style beers, and some ciders from their partners at Tractor Brewing Company in Albuquerque. Taos Mesa’s brewing facility also known as the “Mothership” is perched up on the Hondo Mesa. This hoppin’ spot features a concert venue, restaurant, mountain views, and of course, an in-house brewing facility. The Mothership—their flagship location—is not currently open, but when open, it is definitely worth checking out!

With locations in both Taos and Santa Fe, The Burger Stand at Taos Ale House not only takes pride in the quality of its food but also in its beer. The Burger Stand is always brewing up different selections of craft beers, from regional craft to staple beers; you are sure to find a brew you like. And you definitely can’t stop by a place with the word “burger” in the name and not order one. Make sure to try their classic burgers with their, not-so-classic condiments, like the Chipotle-Cocoa Ketchup and Marshmallow Cream Sauce. What’s a better combo than a burger and a beer anyway?

Although it is self-described as the “smallest brewery in New Mexico,” Chile Line Brewery should absolutely be on your radar. They are doing something most New Mexican brewers aren’t—smoked beer. This idea was born when Chile Line’s head brewer took his own beer tour through Germany and realized no other breweries in New Mexico were brewing smoked beer, but everyone in Germany was. He knew he found his niche. Chile Line currently offers six smoked beers and 15 other style tap beers made from the best local hops around.

Santa Fe Brewing Company currently has six locations throughout Santa Fe and Albuquerque and each location has a uniquely different vibe, featuring the same craft beers locals know and love. They also have a selection of handcrafted cocktails, using spirits from local distilleries only.

Santa Fe brews can also be found canned throughout the state, including up on the hill at Taos Ski Valley. Some local favorites you might look for are the 7k IPA (a hoppy west coast IPA), Social Hour (a hazy, wit-inspired ale with tropical fruit flavors), and the Java Stout (basically beer and coffee in a can, and who wouldn’t love that?) Just look for the yellow and red Zia symbol at any local liquor store and it’s most likely gonna be brewed by Santa Fe!

Established in 2018, Tumbleroot produces a variety of beer, spirits, liqueurs, bitters, and canned cocktails. All of their products are made from scratch using organic, garden-grown, and wild-harvested ingredients. The production space also features an intimate tasting room and bottle shop where guests can learn more about their products and taste them before they purchase. Tumbleroot’s taproom is located in the Club Alegria where you can relax and enjoy beer and cocktails in a beautiful open courtyard or go for a night out and enjoy a concert and get down on the dance floor.

Bosque Brewing is a hotspot for New Mexico natives with seven locations throughout the state. From pickle beers to their popular fruity wheat ale— Elephants on Parade—to fun rotating seltzers the options at Bosque run deep. Join them at their Nob Hill location across from the University of New Mexico or at their massive production center in Bernalillo. Bosque also has a great variety of food options, including bar food favorites with New Mexican twists, aka green chile on everything.

The very first Native Woman-owned Brewery resides right here in New Mexico. Visit their taproom in Albuquerque or Farmington, or try their Denim Tux Pilsner at 192 here in Taos. All of their beer is brewed on Native Land and proceeds from their “Native Land IPA” benefit Native nonprofits. The Albuquerque Taproom features a great indoor-outdoor space and often hosts local bands and food trucks. Be sure to visit their website to see the entertainment and food truck schedule.

Visit one of La Cumbre’s two Albuquerque locations, or try their most popular brew, the Elevated IPA when you take a break from shredding at Taos Ski Valley. Aside from IPA’s they have a pretty wide selection of other hoppy brews including their Project Dank and German-inspired Slice of Heffen. They also feature some less hop-tastic beers, for those who fancy them. Though La Cumbre does not have a kitchen inside, they host a variety of local food trucks daily that all pair nicely with their crafts. As mountain people, we gotta say that we love their motto of “Get Elevated”.

With three Albuquerque locations, Marble Brewery is another widely known local favorite. Their downtown location is great for a night out, featuring a rooftop patio and a stage where they host local bands on summer weekends. The other two locations are perfect if you are looking to sit back and relax. Some of their most popular beers are the Double White—a pale ale that some say tastes like bubble gum, the hazy Belgian-inspired wheat ale, and their Mexican-style lager, Cerveza. Marble’s beers are all canned and easy to find at most local liquor stores and restaurants.

If you plan on eating and drinking your way through our beautiful state (which you absolutely should), these are just a few local microbreweries found in the bigger cities in New Mexico, but there are TONS more to explore. We highly recommend you try some beer from at least one or two… or three different local breweries while you’re here. Cheers!