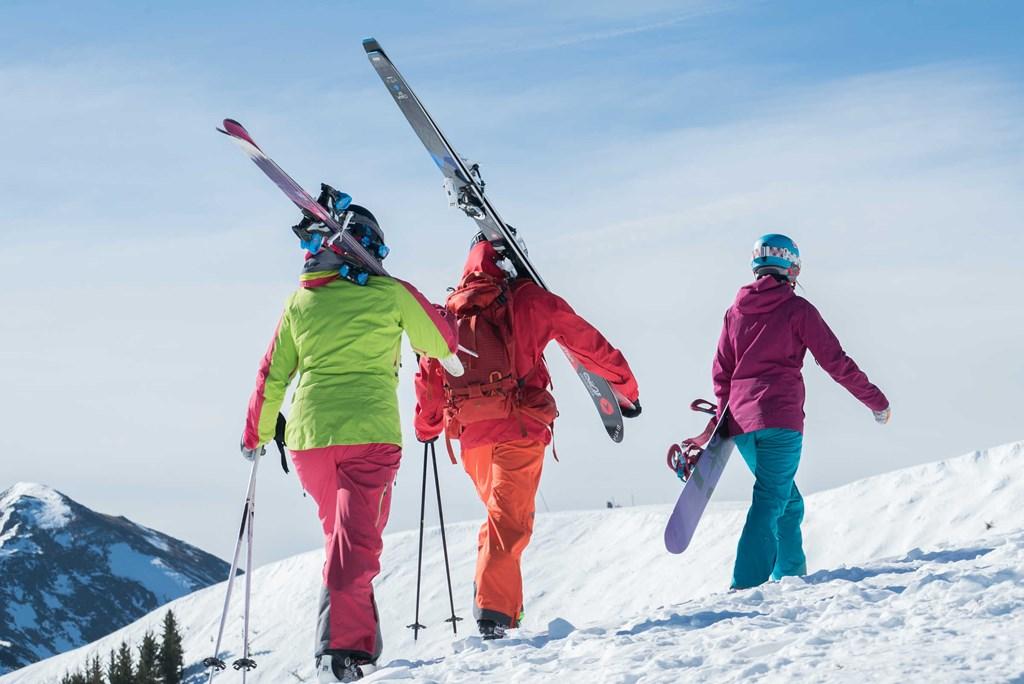 Each of the trail names at Taos Ski Valley has a story associated with it. Below you will find the background information behind some of the most iconic runs in Taos.

AL'S RUN - Named for Al Rosen, the famous Taos surgeon politically instrumental in getting the Ski Valley off the ground. He skied with an oxygen mask and tank for twenty years until his death in 1982.

DON'T TELL - George Hatch, mountain manager, gave the name to this run next to Tell Glade.

EDELWEISS - The edelweiss is the hard-to-get flower of the Alps; it is the distinctive flower all over the Alps.

FIRLEFANZ - "Firlefanz" is a German term for something extra, like silver threads on a Christmas tree.

HANNES SCHNEIDER - Hannes came over here in December of 1938, after having been arrested by the Germans after they took over Austria. He was locked up in a concentration camp where he was bought free by Harvey Gibson, a New York banker. Gibson came from North Conway, New Hampshire. He had Schneider organize a ski school there, run by his star teachers from St. Anton who he had sent over here. He invented the Learn to Ski Week. A colorful man, he was a wise-guy who had black curly hair and very dark skin, much more Italian looking than Austrian. He skied at great speeds and was a great natural jumper, jumping off cliffs and over houses. He was one of the first who put to use the ideas of Mathias Zdarsky, who had published a manual on skiing in 1897. He did it in practical terms and made the elegant stem christie from what was a clumsy snowplow turn. Schneider returned to Austria in 1955 and died there at the age of sixty-five.

INFERNO - Named after the famous race, still run yearly, started by the Ski Club of Great Britain and the Kandahar Club in Murren, Switzerland. It is an old race, and one of the longest, most vertically differential runs in the world.

PORCUPINE - That animal in the tree.

POWDERHORN - The device you carried your gunpowder in.

PSYCHO PATH - A path for "psychos". Named by Wolfie Lert.

RHODA'S REVENGE (from Chilton Anderson) - "Rhoda's Revenge came about when we'd go off the top of Al's Run to sweep, or just go up and make a run in powder, Rhoda would disappear, and then, all of a sudden, she would be with us again. We'd ask, "How and where the hell did you come from?" And she'd just sort of smile sweetly, and we'd go and ski down. It wasn't until a long time later that we realized that Rhoda had found this little cut-off so she didn't have to ski the first steep part of Al's.

SNAKEDANCE - Named by Wolfie Lert for the Hopi dancers.

SPENCER'S BOWL - For E.J. Spencer, my favorite English teacher and coach from my school, in the Engadine, Switzerland.

TELL GLADE - Named for William Tell, the crossbow-shooting marksman, who is also the liberating Swiss hero of the Rossini/Schiller opera.

WHITE FEATHER - Historically, a white feather was the symbol of cowards during the Boer War. In England, gentlemen who didn't volunteer for queen's army in this fight were considered cowards and were sent white feathers by their girl acquaintances. So that's this easy run that we built.

BAMBI - "Bambi" goes back to the Disney movie, as the timid one. It's for slow skiers

BLITZ - This is the German term for lightning. A steep run which unfortunately sometimes avalanches.

CASTOR & POLLUX - These twins of Greek and Roman mythology gave their names to the bright stars in the constellation Gemini. They also gave their names to two rock passages in Murren; we knew that from the Ski Club of Great Britain. Now they are two side-by-side double black diamond trails here in Taos.

DEREK'S PULLOUT - Named for Derek Hale, a patrolman here in the 1970s. Better swimmer than skier and represented Puerto Rico in the Pan-American games. The spot above the turn between Bambi and Zagava gratefully utilized by all novices.

HONEYSUCKLE - Named for the flower.

LORELEI - Lorelei is the blond German siren who combs her hair in the sun, sitting on a tall rock in the Rhine River singing songs that lured the poor German fisherman in their rickety fishing boats to their deaths in the whirlpools of the river. "Lorelei" here is the same thing; it is like a beautiful woman who is very admired but who is dangerous. There's a giant rock field on the right with narrow spots likened to a woman's figure.

MUCHO GUSTO - Named in honor of our Mexican friends.

REFORMA - Reforma refers to the Mexico City boulevard that honors Benito Juarez and the law and order he brought to the Mexican people with the Revolution.

SIR ARNOLD LUNN - A British skier largely responsible for making skiing a competitive sport and who set the first slalom course in 1922. He organized the first Kandahar Race in St. Anton, Austria, in 1928, and the first FIS Alpine World Championships at Murren, Switzerland. Through his efforts, slalom skiing was recognized in the 1936 Olympics.

WERNER CHUTE - For Werner Duetta, caught in a slide in 1971.

YUNG CHO - One of the first paid ski patrolmen. He was the first Korean Olympic skier, and here he shoveled bumps.

ZAGAVA - John Zagava was the partner of Harker in the original Hondo Lodge in 1946, nine years before we got here and walked about with Pete Totemoff.

EL FUNKO - Named for a local businessman who was not an especially gifted skier and may well have fainted at his first sight of this cliff-like run.

HUNZIKER BOWL - My favorite run, never to have a lift. Named for Paul Hunziker, the Swiss engineer who designed the first Kachina lift and who was killed in an airplane accident on the way to inspect the lift.

JAPANESE FLAG - One of the many flags at the Ski Valley; this one used to survey the Kachina lift area.

KACHINA BASIN - Named for one of the deified ancestral spirits believed among the Hopi and other Pueblo Indians to visit the pueblos at intervals.

LONE STAR - Named in honor of the Texas flag.

MAXIE'S - For the late, great, New Mexican balloonist, Maxie Anderson, who made the first Atlantic crossing in a balloon.

PAPA & BABY BEAR - Two of the three original trails together on Kachina. "Mama" is now part of another trail.

PATTON - "Patton" is in honor of my commanding general, George Patton. He was the greatest American leader of the war, and American general who had balls, which most of them didn't. He didn't give his troops time to recover and the chance to reorganize; he followed up completely regardless of the exhaustion of his troops. It seemed inhuman to us at the time, and we were very bitter about it, but it was wise. I think the role he played as the brutal, loud-mouthed general who tried who tried to speak like a low-class soldier was a fake.

RUBEZAHL - Rubezahl is a red-haired, one-eyed East German giant who takes money from the rich bankers and manufacturers of textiles and gives it to the poor working charcoal burners and weavers, a schnitzlized Robin Hood. The first and longest run all the way down the backside.

SHALAKO - Named for Indian dancers celebrating a Zuni mystical being of extraordinary stature.

TOTEMOFF - "Totemoff" is named after Pete Totemoff, an Aleut Indian from Alaska, who worked with Buzz Bainbridge at Santa Fe. He was with me when we first looked at Taos Ski Valley from the air and on the ground. He was a great skier and became a great veteran ski racer later.

WALKYRIES - From Norse mythology: the Walkyries were the wood nymphs who tended the battle-slain warriors and led them to Norse heaven- Valhalla. This is a great run if you hit it after a powder snow; otherwise, there is knee-bashing through the trees.

WINKELRIED - A Swiss who led farmers with no breastplates, nothing, just knives and axes in 1386 to murder the Austrian army. He martyred himself against a wall of lances so his compatriots could be victorious.

FABIAN -"Fabian" was named for Fabian von Schlaberndorff, a technician, who plotted to kill Hitler. He was not military. He put a bomb on Hitler's plane disguised as two bottles of Cointreau. Fabian was ultimately captured and tortured monstrously by the Gestapo who were sure he had something to do with the scheme. He denied everything; he didn't give them any names. He came out a wreck, but he recovered and became a Supreme Court justice. He wrote a book, They Almost Killed Hitler, which had arrived already in bookstores in 1946.

HILDAGO - Named for the Mexican martyr and patriot-priest who perished in his attempt to bring about Mexican Independence in 1810.

JUAREZ - The notably honest and gifted pure-blooded Indian from the extreme south who brought justice and recognition to the Indians and mixed-blood populations of Mexico.

NINOS HEROES - Young Mexican cadets who all died in defense of Chapultepec Castle during the Mexican-American conflict of 1846.

OSTER - "Oster was a German colonel, later general, who was the second man in the German Military Intelligence Service. He realized what Hitler stood for early on and sabotaged the German war effort by warning the Danes that the Germans were planning to attack on the 10th of May, 1940. They didn't believe him because he had several times before told them that the attack was coming, and they thought he was a fake sent by the Germans to deceive them. Oster was executed just at the end of the war by Hitler's men.

STAUFFENBERG - "Stauffenberg" was the general who was nearly successful in placing a bomb, 2.2 pounds of high explosive, more powerful than dynamite, in Hitler's bunker. It was the 20th of July, 1944, but unfortunately, that day Hitler's meeting was not underground, but in the barracks above ground which blew apart with the explosion, but didn't kill Hitler. It burned him, his clothes and his eyebrows, and his eardrums were pierced. His hair was singed, and his clothes were just gone, but he was not seriously wounded. Hitler was able to speak that night on the radio and stop the resulting uprising. Everybody, including the police, had been arrested, and not a shot was fired, to my knowledge. After midnight, the victors had to turn around and let the people go. Actually, there was not much revenge on the ones who had done the arresting because most had been taken by surprise and not resisted, and they were happy to forget. Stauffenberg was shot by a firing squad. He was 38 years old. He was very bright and came from a very distinguished and impressive Southern German Catholic family.

TRESCKOW - Another supreme patriot who conspired to eliminate Hitler.

ZDARSKY - The Austrian engineer, Mathias Zdarsky, born in 1856, who wrote the first really useful ski manual in 1897. He contributed the snowplow and the rudiments of the stem turn, and he was one of the first to go to a metal binding with toe iron and a device that permitted tightening.