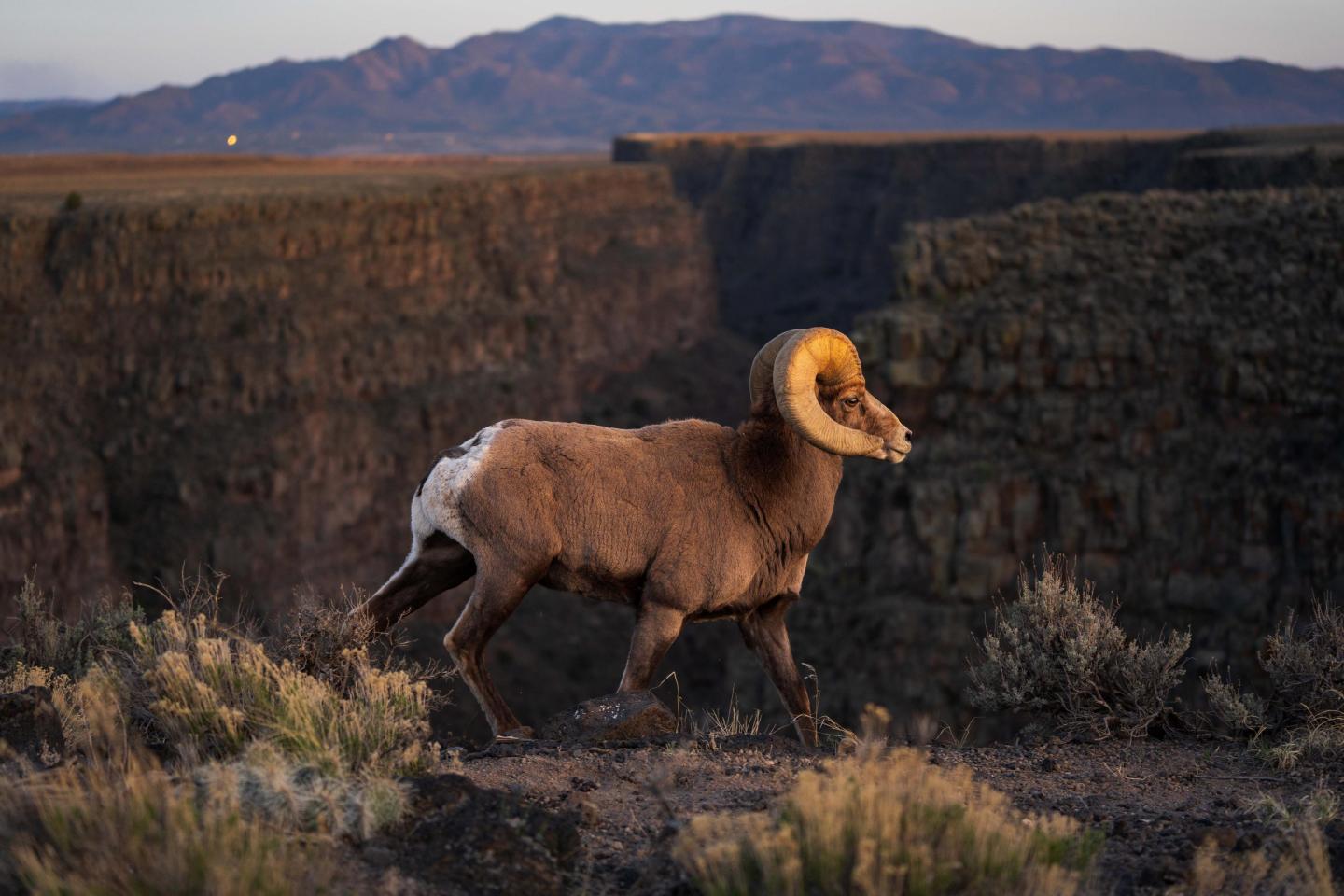 Wildlife in New Mexico: Keep Your Eyes Peeled for These 9 Critters

If you’re an avid nature enthusiast or just curious about critters, you’re in luck—New Mexico is home to an abundance of furry (and not so furry) animals. The lush green landscapes contrasted with desert plains are home to some of the United States' coolest creatures, many of which can be safely spotted on hikes and car journeys—even around Taos.

A diverse selection of the animals roam the state all year round, making the Land of Enchantment a popular stop for vacationers looking to snap the perfect photo of bighorn sheep, black bears, and Mexican wolves, whatever the weather.

Be ready to return home with plenty of new animal facts—these creatures are the unmissable wildlife in New Mexico.

Perhaps the most famous animal roaming the New Mexico landscape is the bighorn sheep. True to its name, this critter is easily identifiable by its huge, curling horns that can weigh up to 30lbs per pair. The males use their horns to fight for mating or territorial dominance, and the sound of the horns clashing can be heard from miles away.

The species of sheep is native to North America and is typically found in the alpine ranges of northern New Mexico. They were eradicated from New Mexico in the 1900s, but due to restoration projects, they’ve repopulated here and we now have over 1,700 Bighorn sheep across 11 herds. They can be found in Wheeler Peak Wilderness, on Kachina Peak (which you can see while on the Via Ferrata tour), and by the Rio Grande Gorge.

Bighorn sheep generally aren’t aggressive but they can get defensive if they feel threatened, so it’s wise to observe them at a distance.

Did you know that cougars, panthers, pumas, and catamounts are all mountain lions? This big cat species is also native to the Americas and has tan-colored fur, complete with a white patch on their chest. The females can weigh up to 141 pounds, while the males can weigh up to 220 pounds.

Mountain lions are territorial creatures and are predominantly found in the mountains, the desert, wetlands, and the forest. In New Mexico, there are around nearly 2,500 lions, with sightings taking place near Gallina Canyon. Oh, and fun fact—mountain lions can’t roar. Instead, they shriek and growl like house cats, and use claw markings to define where their territory is.

Naturally, New Mexico officials urge the public to exercise extreme caution if they are in areas where mountain lions are present.

One of the cutest critters in New Mexico, Pikas are small, mountain-dwelling mammals that look similar to rabbits. They have round bodies and thick fur and are typically found at high elevations, on rocky slopes, or grazing on plants. Pikas are also known as “whistling hares” because of the high-pitched call they emit when they dive into their burrows.

Pikas are not considered dangerous and are common companions for hikers exploring New Mexico’s rugged landscape. Keep an eye out for ‘em in the Sangre de Cristo mountain range.

Contrary to its name, the black bear can actually be brown, red, or even a blondish color. These magnificent creatures can weigh up to 250 pounds but they’re also great climbers—their short, curved claws are designed to help them scale trees at a surprisingly quick speed. In fact, black bears can run up to 35 mph and they’re also adept swimmers.

The black bear is an omnivore, meaning it only eats grasses, roots, and insects. It’s also not an aggressive animal and generally tries to avoid humans. In New Mexico, these bears can live for longer than 30 years and have been sighted roaming in cities like Santa Fe, Albuquerque, and Ruidoso hunting for tasty garbage.

By the way, the black bear is the state mammal of New Mexico!

The Mexican wolf is also called the lobo—Spanish for wolf—and is a subspecies of the gray wolf, one of North America’s smallest wolves. The wolf is identifiable by its unique coat, which is a blend of yellows, grays, and blacks. Unfortunately, it is listed in the Endangered Species Act and is currently undergoing conservation efforts to repopulate. As of 2021, there were around 500 Mexican wolves, 60% of which live in New Mexico.

Mexican wolf sightings are rare but not impossible. The Blue Range Wolf Recovery Area is your best bet, which encompasses the Apache-Sitgreaves National Forest and the Gila National Forest. If you’re tracking the wolves, know that their pawprints are about 3.5 inches long and 3.25 inches wide—it’ll help you distinguish them from coyote markings.

Deer are everywhere in New Mexico. Mule deer are medium-sized deer with large antlers that have a calm and inquisitive nature. They’re not shy to seek out humans and have been found in people’s gardens and lawns around the state. Out in the wild, they can jump to impressive heights, leaping and landing on four legs at once. New Mexico has two kinds of mule deer: the Rocky Mountain mule deer and the desert mule deer; the first is found in the northern parts of the state, and the second more in the south.

Elk are also populous here. Much larger than mule deer, elk can weigh up to 1,100 pounds, have antlers that reach up to four feet long, and prefer to live within dense forests around mountain regions. They can be found in the cottonwood groves of Glorieta Creek in the summer months, as well as alongside the Forked Lightning Ranch. Come fall, they gather in the Trade Field east of Taos Pueblo.

The Chaparral, AKA the Greater Roadrunner, are found at lower elevations, around 7,000 feet, and tend to spend most of their time on the ground on trails and roads. It can be spotted by its long tail, streaked brown crest, and olive-gray back. While they are capable of flight, it is unusual to see them in the air. Even when threatened by a predator, roadrunners will opt to run as their means of escape.

Early settlers in New Mexico believed that the Chaparral helped lost wanders find their way, hence why it’s been awarded the title of the official state bird.

There are two types of eagles that call New Mexico home—the glorious Bald Eagle and the Golden Eagle. The first is famous for its white head and dark brown body—and for being America’s bird, sorry Ben Franklin—can hunt from as high as 10,000 feet. In New Mexico, these incredible birds can be found throughout the year around bodies of water, although spotting one isn’t easy and is a special occurrence.

And did you know? Bald Eagles aren’t bald at all, their name stems from “piebald”, an Old English working meaning white patch.

Meanwhile, the Golden Eagle has dark brown and gold feathers on its back and neck, and are expert hunters. They tend to congregate around cliffs to nest but are also present in grasslands, woodlands, and farmlands. Like Bald Eagles, they are in New Mexico whatever the season, but can be distinguished by their whistle-like call.

For those searching for a more scaly critter, New Mexico is no stranger to rattlesnakes. There are seven species here, including the Western diamondback, the rock rattlesnake, and the Mojave rattlesnake—which happens to have a venom that can kill someone within five minutes…so maybe avoid that one.

Other snakes like the Coral snake have a yellow-ringed body and a black nose and can grow up to 21 inches in length. These snakes eat mice and lizards, and are highly poisonous but have fixed fangs, so they have to chew their prey—meaning their venom delivery isn’t as potent as that of other rattlesnakes.

From snakes to sheep, lions to little Pikas, this is just a small sample of all the critters going about their lives in New Mexico. Are you ready to go on your very own safari in the Land of Enchantment yet?